Search
Home About us

Since the late fifties of the last century, the Philips company had her own ‘Veiling’ subdivision (the word Veiling means Auction). It was however not an auction in the proper sense of the word but merely a place where Philips employees could buy waste wood and other waste materials like small hardware and small electronics parts for a song. With this, Philips gave the handymen among her employees the opportunity to purchase unnecessary or unsalable goods. The Philips company grew very fast during that time and therefore the Philips Veiling grew correspondingly. The number of goods increased with e.g. tools and used machines. Very soon, not only the Philips employees could buy the offered goods but also the suppliers and other entrepreneurs in the region. After some time, one of the first recycling projects in the Netherlands was started up by the Philips Veiling and from then on the name changed to Mirec B.V. 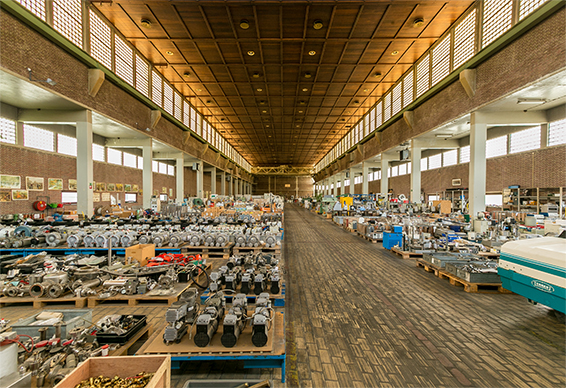 In 1996, Mirec B.V. was sold, and after a few take-overs, came into the hands of the Sims Group. The name changed again and became Sims-Mirec B.V. Shortly after this last name change, the parent company decided that Sims-Mirec B.V. had to concentrate on industrial recycling and therefore the ‘old’ Veiling subdivision did not fit within the company philosophy, and a take-over candidate was sought and also found.

By means of a management buy-out, the Veiling subdivision was taken over by the present management and continued as an independent business under the name: ‘Industriële Veiling Eindhoven B.V.’. The number of goods have increased since then and the stock includes now all kinds of industrial goods. The diversity goes from small hardware or electronics parts to heavy machines and custom made special equipment. For the starting or already established entrepreneur, the Industriële Veiling Eindhoven is the obvious partner to acquire used machines, vacuum pumps or other industrial goods, far below the original purchase price.

In the years as an independent company, the Industriële Veiling Eindhoven has built a solid reputation as a reliable partner for many entrepreneurs. To put it briefly: what started in the last century as very small, has now grown into a reputable company. Not only for the entrepreneurs in the region Eindhoven or in the rest of the Netherlands, but also within and far outside Europe.

Industriële Veiling Eindhoven B.V. is located on the openly accessible industrial complex De Beuk – Zwaanstraat in building TAA, across the Dutch Aero Space building and right next to the Smurfit Kappa building.

Sign up for our newsletter Don't miss the latest updates